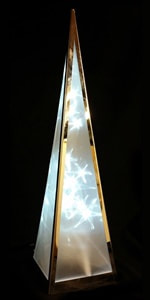 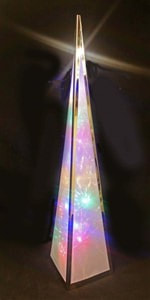 The Starburts Pyramids are surrounded by a highly polished stainles steel frame.

n this Rainbow Starburst lantern the LEDs inside multi-coloured — red, blue, green and yellow. The Starburst effect has all these colours overlapping and blending into each other as the miriad points of light swirl around inside the Pyramid. It looks like there's a firework display going off inside the lamp !

As with the other Pyramid lamps, these are mounted within a polished silver steel frame.